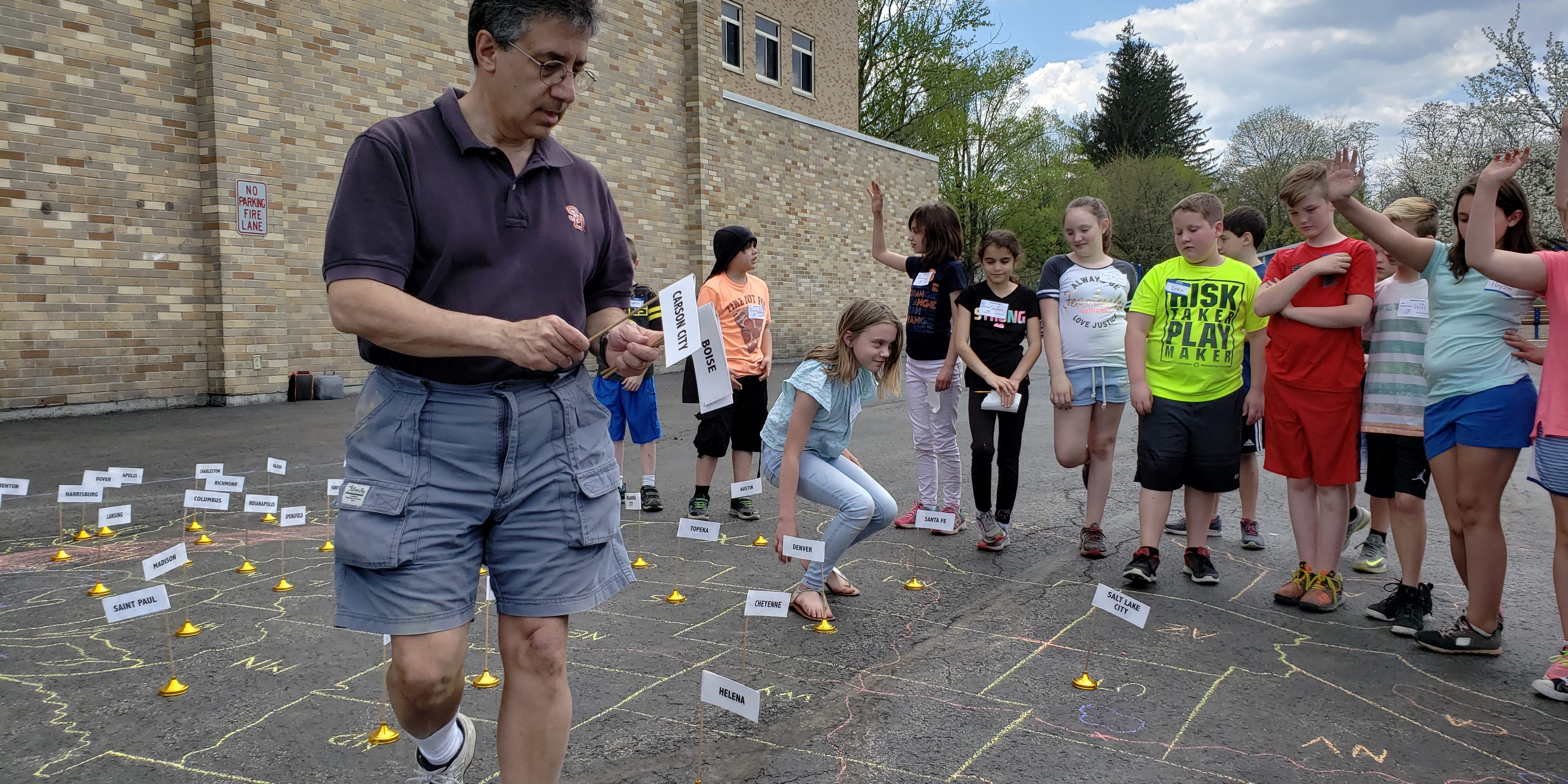 Combining art, cartography, and US history as a geography assembly targeted for 5th graders.

Typical fee is $500, which includes 3 or 4 sessions of this geography assembly program on one school day, with up to 40 students per session.

Combining art, cartography, and US history as a geography assembly targeted for 5th graders.

Make Maps Matter is a unique outdoor geography assembly in which I draw a chalk map of the USA freehand, to-scale, and from memory, outside on the school playground or parking lot, about 30 feet wide. While I’m drawing, I talk about US history and geography, and engage the students in an exciting tour of the country. I tell the students about the history of the states, including the 13 original colonies, westward expansion, and famous facts about the states. I also point out the locations of some of the significant lakes, rivers, oceans, mountains, and large cities, and some fun facts about how the state borders were formed. The students become involved right away as they answer simple questions about the states.

Students often ask how I got started in this, and how I learned to draw a map freehand, so I discuss how I taught myself to draw an outline map of the US when I was in fifth grade. In doing so, I emphasize the value of practicing a skill over a long period of time.

The entire performance lasts about an hour and a half, depending on which aspects of the performance the teacher has requested. The entire performance is grade-level appropriate for 4th, 5th, and 6th graders. It’s educational, but it’s also engaging, and enjoyable, and completely in support of a grade school United States geography curriculum.

This presentation benefits all three kinds of learners—auditory, visual, and kinesthetic. Auditory learners pick up on the information that I convey orally while I’m speaking. Visual learners recognize outlines of familiar states, and kinesthetic learners are able to run around the map and learn geography as they move and touch the various states they see outlined, gaining a spatial familiarity with the layout of the USA.

The overarching goal of the presentation is to give the students a new, deeper appreciation for maps and mapmaking as a way to grasp and organize the world around them. They should see maps as enjoyable and useful tools for finding their way to new and exciting places in America. This experience of running around on a map that they see unfold before their eyes allows them a whole new interactive dimension and appreciation for geography.

I also paint USA maps on school playgrounds: $250 for a white state outline map, $400 for white outlines and states painted in four colors./Performances