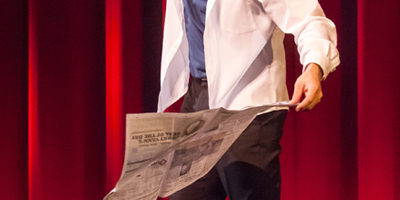 Current pricing is $650 for a single performance, and $275 for each additional same day, same location, performance. Block booking discounts are available.

Dates are available throughout the school year.

‘Contact: The Magic of Communication’ is an interactive assembly program which explores the vital role communication plays in students’ ability to express themselves, work with others, and explore the world around them.

Express: Featuring juggling, mime, and the performance of an ancient Aboriginal instrument, the opening routines are a whirlwind of movement, color, and music. Topics explored: How is music used to convey emotions and tell stories? How can you communicate without speaking?

Work: In one of the many interactive parts of the program the audience learns how to applaud, laugh, and say ‘Thank You’ in American Sign Language. Later a volunteer from the audience is invited onstage to perform an astonishing feat of magic while receiving instructions entirely in Spanish.

Explore: In the final routines Scott uses spectacular illusions to illustrate how innovations in technology, from the printing press to the radio, have allowed mankind to communicate over vast distances in space and time.

Also available is ‘Magic by Scott Jameson’: See the show audiences are calling “A blast!”, “Refreshingly modern”, and “Heartwarming fun for the whole family”. ‘Magic by Scott Jameson’ is an extraordinary family oriented performance full of magic, music, and juggling that will have your audience laughing out loud and perched on the very edge of their seat. This high energy show is perfect for your next field day, family night, fundraiser, or that crazy Friday before a vacation week! Visit www.scottjameson.com to view a video and read additional reviews.