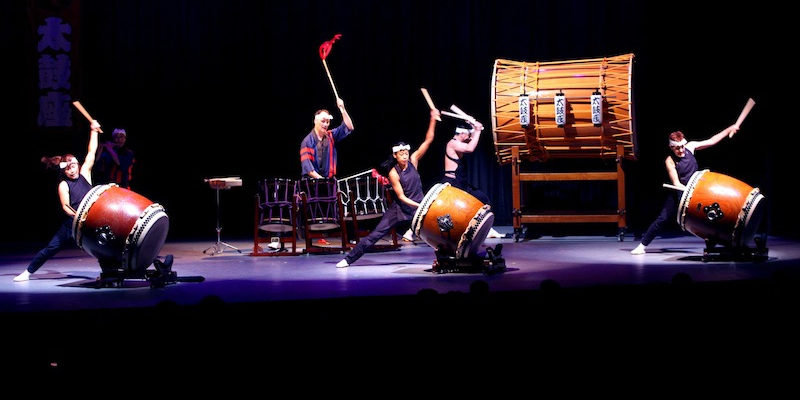 We are available throughout the year

Taikoza introduces students to the rich festival traditions of Japan. Accompanied by energizing taiko drums, colorful dances and Japanese flutes, students take a journey through different regions of Japan as they explore traditional folk songs and dances. Taikoza will educate the student about Japanese instruments and dances. Children will learn words of Japanese and also some students will be picked to play on some of the instruments. A Fun, interactive educational multicultural program for children of all ages. We cater to the different age ranges with some more explanation for High schools. This is a great program for Asian pacific Heritage month as well as diversity, percussion, music or dance themed programs. This program has been part of the NYC Symphony Space CAP educational program for the past 20 years.

This Japanese taiko drum group has dazzled audiences worldwide with its electrifying performances since 1995. Taiko means big drum and Taikoza draws from Japan’s rich tradition of music and performance, and is inspired by the many festivals and rhythms of Japan. “Beginnings,” Taikoza’s first album, was nominated for a 2004 Just Plain Folks Music Award. The have gotten five more nominations for their new CD. Marco Lienhard, the director has been performing internationally and presented a program with Carnegie Kids in Miyazaki Japan. Taikoza has presented their popular educational programs in Europe, Asia and South America. Taikoza has appeared on ESPN at the Sumo Tournament held at Madison Square Garden, and have toured internationally. You can also hear Taikoza in the Nintendo game “Red Steel.”

Drawing from Japan’s rich tradition of music and performance, Taikoza has created a new sound using a variety of traditional instruments. In addition to drums of assorted sizes, Taikoza incorporates the shakuhachi and the Fue (both bamboo flutes) and colorful dances.

The group has toured internationally and has appeared on ESPN, NBC, History Channel, etc. Taikoza’s music is featured on Nintendo’s Wii game: Red Steel 1 and 2. The group has performed for the SUMO tournament at Madison Square Garden and tour.

Taikoza presents a very popular program for schools in the New York, New Jersey, Connecticut, Philadelphia and Virginia area for Young Audiences and Symphony Space. Taikoza did a tour of Birmingham, AL area schools funded with a NEA grant that the Birmingham International Festival received.